Shiv Gopal Mishra, secretary of the National Council of the ‘Staff Side’ (JCM), has written to the Cabinet Secretary this week. It said that all central government employees, including central paramilitary forces, have protested against the National Pension Scheme ‘NPS’. They demand that old pension system should be restored by abolishing NPS.

From January 1, 2004, employees in government service were taken out of the old pension system and included in the NPS. In his letter, Mishra has said what the workers belonging to the NPS scheme, who are retiring today after 18 years, have got. In NPS, one worker gets a monthly pension of Rs 2417, another Rs 2506 and a third worker Rs 4900.

There is no provision for dearness relief

According to Shiv Gopal Mishra, if these same employees were under the old pension system, they would have received Rs 15250, Rs 17150 and Rs 28450 per month respectively. Even after depositing 10% of their salary every month in NPS, employees get a meager pension on retirement. There is no provision for dearness relief like in the old pension system. Employees who come under the old pension system get financial benefits in the form of dearness relief. Sreekumar says that there is a lot of anger in all departments of the central government regarding the NPS. Due to which the laborers are suffering huge economic loss. Even their social security was not guaranteed. After retirement, government employees are deliberately put in a rut.

It has been 18 years since NPS was implemented. If an employee in this scheme retires, he gets a pension of only three-four thousand rupees. In the old pension system, after retirement, an employee got 50 percent of his basic salary as pension. There were other advantages as well. This is not all in NPS. 40 percent advance can be taken in old pension system. 40% pension is returned after 15 years. NPS is a market driven system. In this, the economic profit is less, while the loss is more, because there is always room for risk in the market.

OPS, many states are now implementing

In the old pension system, there is a provision that if the age of a retired employee crosses 80 years, his pension is increased by 20 percent. If a person lives for 100 years, he gets a pension equal to the basic pay. Some time ago a parliamentary committee recommended that the pension up to the age of 65 should be increased by five percent. After this, if the pensioner crosses the age of 70, his pension should be increased again by five percent. There is talk of increasing the pension by 20 percent after 80 years. This was done because the life expectancy of many people rarely reaches 80 years. West Bengal government has not implemented NPS on its own. There is an old pension system going on. Mishra wrote in his letter that now NPS has been withdrawn in Jharkhand, Chhattisgarh, Punjab and Rajasthan. Other state governments are also considering restoration of old pensions.

There will be a blow in the Lok Sabha elections

Central government should think deeply about this demand of employees. Old pension is a big issue for central employees. The National Council of the Staff side has sought an appointment with the Cabinet Secretary. In this regard, civil defense personnel staged a demonstration at Jantar-Mantar on September 26. The employees said that if the central government does not implement the old pension system now, it will have to bear the brunt of it in the 2024 Lok Sabha elections. Member of National Council of Staff Side (JCM) and General Secretary of All India Defense Employees Federation ‘AIDEF’ Sreekumar says that the Central Government has cheated the employees by canceling the old pension. In NPS, if a worker retires after 25 years of service, he will get a pension of two to four thousand rupees. In the old pension system, on retirement, an employee got 50 percent of his last basic pay, 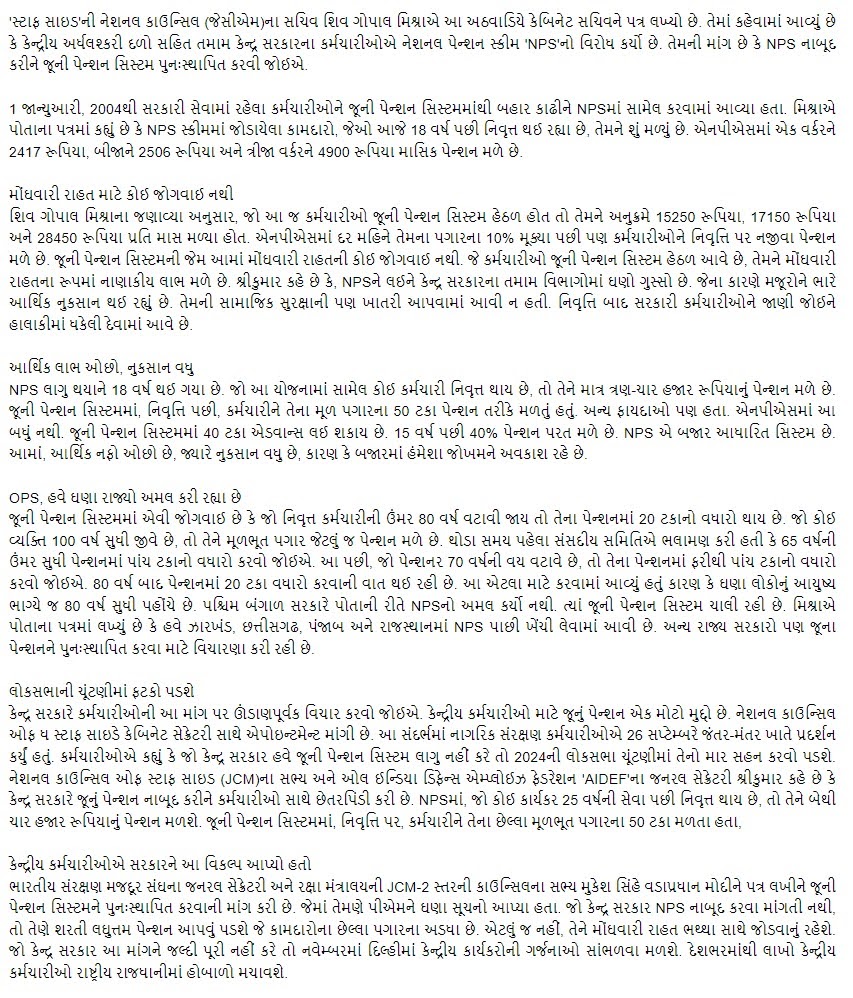 Central employees gave this option to the government

Mukesh Singh, General Secretary of the Indian Defense Workers’ Union and member of the JCM-2 level council of the Ministry of Defense has written to Prime Minister Modi demanding restoration of the old pension system. In which he gave many suggestions to the PM. If the central government does not want to abolish NPS, it will have to provide a conditional minimum pension which is half of the last salary of the workers. Not only this, it has to be coupled with dearness relief allowance. If the central government does not meet this demand soon, the roars of central activists will be heard in Delhi in November. Lakhs of central employees from all over the country will riot in the national capital.